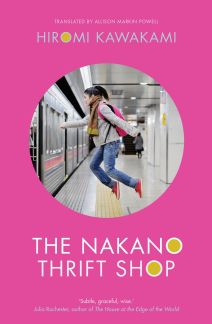 So you may (or may not, I won’t be offended) have noticed the lack of a blog post last week. The reason for this is that I was busy trying and failing to read this book, which was an experience similar to wading through treacle, if treacle was boring and tasteless.

The Nakano Thrift Shop isn’t the kind of book I would normally pick out- for example, on the back Vogue says it’s ‘one for the holiday suitcase’, which would immediately put me off. However, the guy in the bookshop saw me looking at the Murakami section and recommended Hiromi Kawakami as a similar author. Clearly, this man had never read anything by Murakami.

The book follows Hitomi, a young woman working in a second-hand store owned by the idiosyncratic Mr Nakano, and the stories of several other people connected with the shop; Mr Nakano’s sister, and Takeo, another employee. Hitomi finds herself falling in love with Takeo, despite the fact that he’s silent and not very emotionally available. I don’t know what happens in the end, because I couldn’t finish it.

I generally make it a rule to finish every book I start, no matter how bad, particularly if I’ve already gotten halfway through. With this book, though, I found it so uninvolving that I struggled to even get that far. The characters (even the narrator) seem distant, cold and inert, making it impossible to feel any sympathy for them. Somehow the author manages to make even the most interesting events- one of the characters getting stabbed with a letter opener, for example- into just more of the same dirge.

Another thing that annoyed me was the author’s inconsistent and unclear use of speech marks. Sounds super picky, I know, but hear me out. In some books, e.g ones written in a stream-of-consciousness style, the omission of speech marks works well and adds some momentum. The Nakano Thrift Shop isn’t written in a stream-of-consciousness style, though, so in this case it’s simply irritating. Additionally, the author can’t seem to decide whether she wants speech marks or not, and constantly switches between the two. This makes for a confusing read.

Usually, I like books where nothing really happens; if done well they can be subtle, insightful and true to life. However, The Nakano Thrift Shop is an example of what can happen if done badly; a boring, lifeless and monotonous piece of writing. It’s almost aggressively bland. The worst part is that it’s very full of itself. While reading it you can definitely tell which bits are meant to be poignant– but they just come across as a bit pretentious.

Unless it suddenly becomes amazing in the last third, The Nakano Thrift Shop is not a book I would recommend. Furthermore, I see no comparison between this and anything by Murakami- to be honest, I think the salesperson probably just recommended it because both the authors are Japanese.

Hi there! I'm an amateur seamstress with a keen interest in fashion history. I've been sewing (and occasionally knitting) my own clothes since August 2018. View all posts by oolongstitches