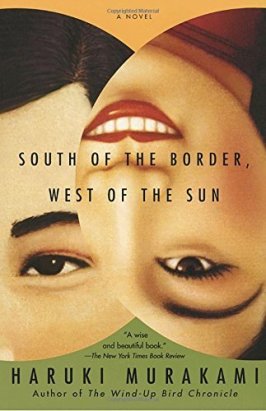 I haven’t read a Murakami novel in a long time (well, actually it’s only been a few months, but for me that’s ages) and the relief that washed over me when I started reading this was overwhelming. Returning to his controlled yet eloquent style felt like putting on a well-worn pair of shoes.

South of the Border, West of the Sun follows Hajime, a happily married man in his thirties who runs a jazz bar (sound familiar?). His life is turned upside-down when his childhood friend Shimamoto, now a mysterious and alluring woman, reappears.

Sounds cheesy, right? To some extent, Murakami manages to transcend the cliches that litter this book, but mostly it made the characters seem one-dimensional and cardboard. I’m used to his narrators being bland, middle aged men, and that doesn’t normally stop me from relating to them. In this case, though, I found the fact that the two main characters are literally walking cliches (man going through a mid-life crisis, femme fatale from a ’40s film noir) stopped me feeling a connection to the book. At times it felt like a bad parody of a Murakami novel.

That’s not to say I hated it, though. I just have pretty high standards when it comes to Murakami’s books, having absolutely loved some of them in the past. If I’d read the novel without anything to compare it to, I might have liked it more.

It’s not as obviously weird as some of his other works- it doesn’t have any magical realism or anything- but it still has the same mysterious atmosphere hanging over it, which is partly why I kept reading it. Plus, it’s really short.

Because I’ve now read most of his novels, I’ve become so familiar with every quintessential Murakami feature that I find myself playing bingo without even realising I’m doing it. From the very first page, I’m on the look out for any mention of ears in a sensual way, the phrase ‘the swell of her breasts’ and descriptions of ‘a simple meal’ that is clearly anything but ‘simple’. It’s an annoying habit of mine that I find a bit intrusive. Maybe I should avoid reading his books for a while…

Overall, not a very memorable book, but not an appalling one, either.

Hi there! I'm an amateur seamstress with a keen interest in fashion history. I've been sewing (and occasionally knitting) my own clothes since August 2018. View all posts by oolongstitches

2 thoughts on “‘South of the Border, West of the Sun’ by Haruki Murakami”